History of cattle breeding in Poland

Simmental cattle are derived from broad-browed alpine cattle (Frantosus) originating from Bos primigenius. Simmental cattle are native to the Swiss Simme River Valley, which lent its name to local spotted cattle. The advantages of the local cattle are evidenced by the fact that they were first exported from Switzerland to other countries in the 16th century. Simmental cattle came to the Podlasie area in Poland (among others, to the estate of Princess JabŁonowska) in the late 18th and early 19th centuries. By the end of the 19th century, they spread all over Poland, mainly in the Eastern borderlands. The principal Simmental breeding centres ran along the Wallachian trade route known as the beef route. During that time, Simmentals were dual-purpose cattle but were also used as draft animals. The milk of Simmental cattle, characterized by a high fat and protein content, was used to make cheese and salted butter, which was sold at the market. Milk was consumed mainly by the poor peasant population. Oxen were used in farming for traction power and then sold to local slaughterhouses or droved to slaughterhouses situated along the trade route. The first successes of Polish Simmental breeders took place during that time. In 1870, J. Wiktor exhibited his stock of Simmental cattle at the Breeding Show in Paris, and the next year his stock of Simmental cattle won a gold medal in Vienna. Cow milk yield books mentioned 9 milk-recorded Simmental herds in the Sanok district alone. In 1909, 10 herds were subjected to milk recording and the average yield was 2323 kg of milk and 75 kg of butter. In 1910, the highest yield of a Simmental cow recorded in the books was 7238 kg of milk and 253 kg of butter. The best herd of that time was owned by Dr S. Grodzki from Bzianka, with an average yield of over 4000 kg milk per lactation. The top performer was Lula, a cow with a yield of 6076 kg milk and 4.29% fat.

The Mountain Cattle Breeders Association was established in 1920 with 7 herds of Simmental cattle (i.e. about 747 cows and 51 bulls for service).

Ultimately, the south-eastern region became the main centre of Simmental breeding in Poland.

The Second World War and the first years after the war witnessed a decline in Simmental breeding. As a result of the invader's decision to liquidate sires and later to regionalize the breeds, Simmental cattle survived mainly in small farms that were not included in the milk recording scheme.

Simmental breeding has been revived since 1954 by establishment of the Pedigree Breeding Centre in BrzozŁw in 1955. This pioneering centre, with a good tradition of Simmental pedigree breeding, was leading the field for many years. The centre developed on the basis of domestic cattle with considerable support from breeding calves and stud bulls imported from Austria, Switzerland, Romania and Germany. Polish genetics was supported by western genetics until the late 1980s. The Pedigree Breeding Centre in BrzozŁw carried out the breeding programme for the Polish population of Simmental cattle by breeding mothers of bulls originating mainly from this centre and through the central growing facility for Simmental bulls. Individual breeders used the centre's achievements for many years.

In the late 1980s and early 1990s, as a result of changes in national breeding, many large state herds were closed down in favour of the private sector. The Pedigree Breeding Centre in BrzozŁw was liquidated. Most Simmental cattle remained in small farms owned by individual breeders. A herd owned by the Experimental Station of the National Research Institute of Animal Production in Odrzechowa was the only large state herd, but phased out the breeding of Red-and- White cattle in favour of Simmental cattle. The Bull Milk TeŁting Station has operated at the Centre since 1975 to evaluate first calvers sired by teŁt bulls using the station method. The introduction of the new method resulted in the liquidation of the station, while the centre's breeding activities focused entirely on the Simmental breed. The Simmental Bull Meat TeŁting Station at the Experimental Station in Odrzechowa evaluateŁ teŁt bulls for beef performance. The Odrzechowa station keeps one of the largest herds of Simmental cattle, using them for milk and meat with ecological grassland utilization while being involved in the Simmental breeding programme as far as possible.

The National Research Institute of Animal Production supervises the implementation of the Simmental breeding programme and is responsible for the evaluation of bull breeding value with regard to dairy and beef traits.

The MaŁopolska Biotechnology Centre (MBC) in Krasne has been actively involved in Simmental breeding from its beginnings. It was established as the Insemination Centre in 1958, renamed as the Breeding and Insemination Station in 1975, and converted into the MBC in 2000. This centre carries out the breeding programme for Simmental cattle and implements its own evaluation and selection programme for Simmental bulls. The MBC specializes in the breeding and popularization of Simmental stud bulls, and in the production and distribution of Simmental semen for both the Simmental population and for commercial inseminations all over Poland. For 10 years, the centre has successfully cooperated with the German station Besamungsverein Neustadt a.d. in Bavaria. As a result of joint bull teŁting, top scoring Simmental bulls are included in both Polish and German breeding.

The domestic population of Simmental cattle has regularly increased since 1994. Breeders from different regions of Poland are becoming interested in the breed. Many large private herds are established all over Poland, but the south-east region of Poland (Carpathian Foothills and Bieszczady Mountains) remains the leading region, dominated by small farms with low farming culture. Landform features and climatic conditions favour tough and resistant cattle that are undemanding in terms of feed quality and maximize the use of feeds from grasslands. This is one the main reasons for long-term popularity of the breed in this region.

Because of the European Union requirements for milk production, breeders had to make large investments on their farms. Because of the lack of funds and the size of their farms, many breeders are interested in the production of high quality beef based on Simmental cattle. This has been possible in Poland because dualpurpose production has been retained in the Polish population. For many years, the mass exports of Simmental calves, mainly to Italy, provided good income to farmers but posed a threat to the breeding. In 2004, the Polish Ministry of Agriculture and Rural Development delegated the task of herd-book keeping and implementation of breeding programmes to breeders' associations.

The Polish Simmental Cattle Breeders' Association was established in 1994 and has as its members breeders of Simmental cattle only. The Association is a member of the Polish Federation of Cattle Breeders and Dairy Farmers, and in 1997 joined the European structures of the European Simmental Federation. Simmental breeders and users formed the association to continually improve the productive and breeding value of animals through proper selection and use of best bulls, keeping of records and herd-books, selection of parents, selection in herds and enlargement of the Polish Simmental population. Another aim is to train breeders in the proper rearing, feeding and environmental conditions to make milk and meat production profitable while stressing the product's quality and health properties.

The Polish Simmental Cattle Breeders' Association developed the Breeding Programme, which defines the tasks aimed at increasing the breeding and productive value of the animals. The goals for the Polish population are to improve Simmental cattle without using other breeds and to maintain the dual-purpose type in accordance with breeders' wish, i.e. to improve both milk and meat traits while retaining good functional traits such as health, length of productive life and fertility.

The Polish population of Simmental cattle includes about 35,000 purebred cows, which form about 1% of the population. The interest in breeding Simmental 82 cattle continues to increase, as evidenced by an ever-growing number of milkrecorded cows and registration of new herds all over Poland.

Recent years witnessed the greateŁt percentage increase in the number of cows teŁted in the Simmental population in relation to previous years.

Considerable importance is attached to the selection of bull dams, which is based on the breeding value index. The candidateŁ for mothers of Simmental bulls should meet the following requirements: entry into the register of merit, positive evaluation of breeding value for dairy traits, evaluation of type and conformation with at least 80 points for overall score and at least 24 points for the udder.

Bull sires are selected from Polish breeding or imported from Germany, Austria and Switzerland. Of all the Polish Simmental bulls evaluated, 2-3 bulls selected as fathers represent the desirable type and have achieved the best breeding value scores for milk and fattening traits.

The individual evaluation of Simmental bulls has been carried out in growing facilities since 1974. Since 2004, 11 traits have been evaluated on a scale of 1 to 9 points. Animals are also given overall scores on a 100-point scale which includes 5 parameters: general appearance, frame size, type and conformation, legs and feet, and muscling. The MaŁopolska Biotechnology Centre buys 7 bulls for the insemination centre. After teŁt insemination, their breeding value is evaluated based on progeny performance. The breeding value of bulls with regard to milk traits is estimated using the BLUP Animal Model based on the first 3 lactations. Over the last 5 years, the milk yield of the daughters of bulls evaluated increased by 486 kg for the first lactation, by 399 kg for the second lactation and by 307 kg for the third lactation. Fat and protein yield has also increased on a regular basis. In Poland, the selection index for Simmental cattle includes milk production traits.

Since 1993, the meat evaluation of Simmental bulls has been made at the National Research Institute of Animal Production based on male purebred progeny. Feeding at the station is based on the maximum use of feeds produced on the farm from grasslands. The evaluation is positive if the fattening and slaughter value index exceeds 103% and the meatiness index exceeds 98%.

The evaluation of bull and cow breeding value for conformation traits has been one of the components of the Simmental improvement programme for several years. This evaluation is based on the BLUP Animal Model. The conformation of cows is evaluated according to regulations from 2004 based on detailed assessment of 20 linear traits on a scale of 1-9 points and a 100-point scale which includes 5 categories, after taking into account appropriate weights. The use of type and conformation scores in the selection of Simmental bulls has clearly improved the animals' frame size and the cows' udder conformation.

Based on the results of breeding value evaluation for dairy and beef traits, the best 2-3 bulls are chosen every year for reproduction in the area where Simmentals are bred to improve the population and bulls with very good meat traits are chosen for commercial crossbreeding in the other areas of Poland. Simmental bulls are very popular with beef livestock producers, as evidenced by the number of cows and heifers inseminated by Simmental bulls. In 2006, 620,000 cows and heifers were inseminated with the semen of beef bulls, and about 37% of these were inseminated by Simmentals, which ranks them second in Poland after Limousin bulls (about 41%).

Future breeding work involving Simmental cattle will focus on including new functional traits such as length of productive life, fertility and somatic cell count, which will be used to evaluate breeding value and the selection index. The meatiness index is now being modified to include EUROP carcass grade and carcass muscling. This index will become a component of the total selection index.

Although the Polish population of Simmental cattle is not large, it enjoys increasing popularity with breeders across Poland. 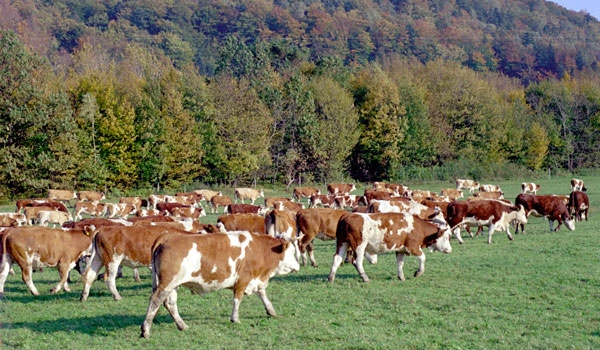 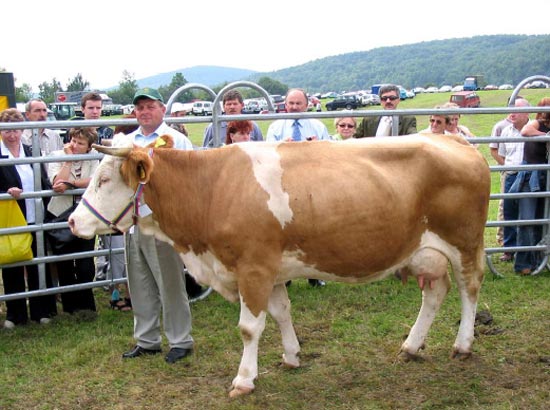 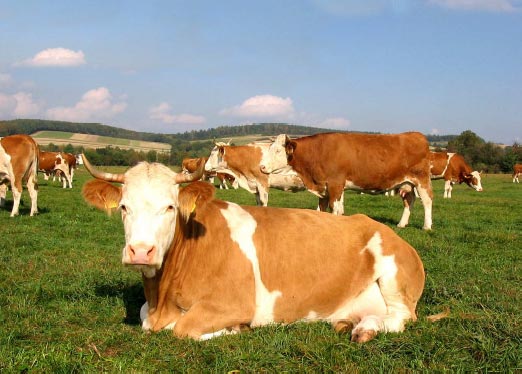 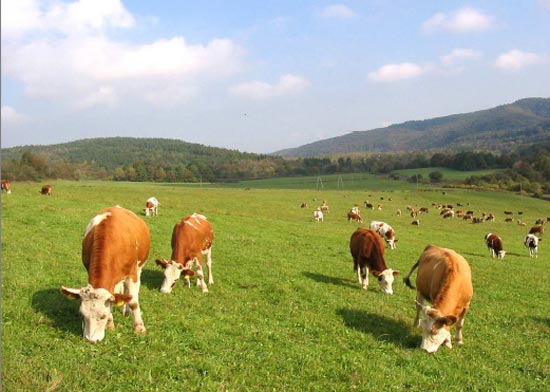 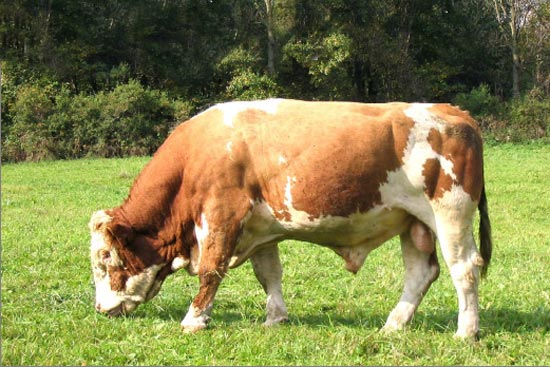 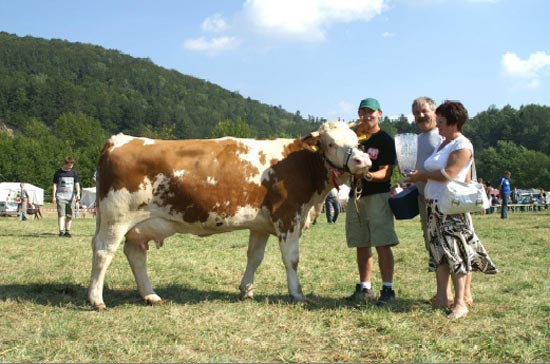 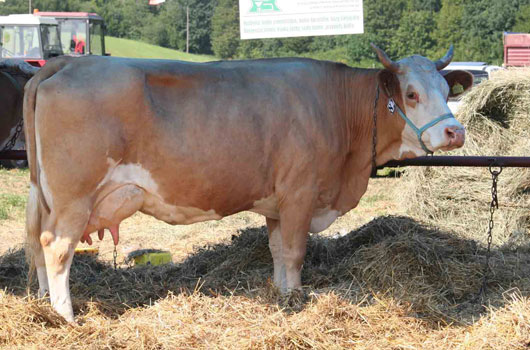 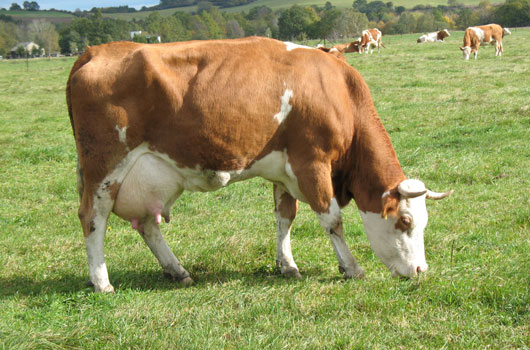 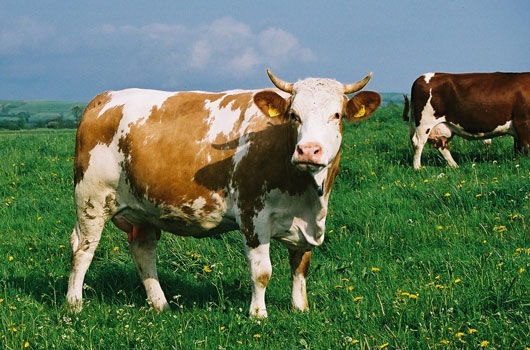 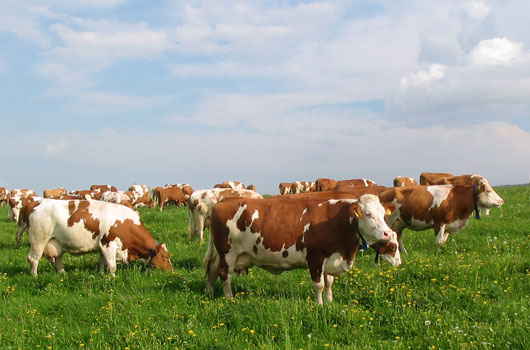